A Swiss Army knife is a marvelous thing. It is a bunch of useful tools all wrapped up in something small enough to put in your pocket. 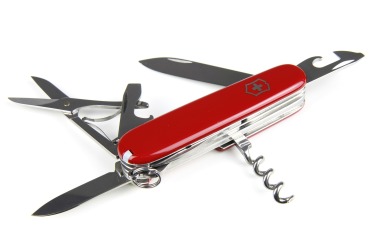 Like a Swiss Army knife, sometimes you can’t tweak one function of a multifunctional protein without disrupting its other functions. (Pixabay)

Need to cut a string? It has the scissors to do that. How about cutting that little piece of wood? Yup, the tiny saw can do that. It has lots of tools that can do lots of things.

Now of course, it isn’t perfect. You would not want to use those scissors for cutting fabric or to use that saw to cut a 2 by 4. And there really isn’t any easy way to make a better pair of scissors or a better saw in the Swiss Army knife without wrecking the other tools in it.

If you make a better pair of scissors, you’ll have a worse saw. And vice versa.

That is why if you want to improve the saw, you need to isolate it away from the other tools. This holds true for the scissors and yes, even the knife.

Multifunctional proteins can have similar constraints. Tweak one function and it can mess up the other functions. A better saw makes a worse pair of scissors.

Nature doesn’t usually improve on a protein’s function by pulling out the part of the protein that does a specific job and making it better. No, instead, she duplicates the gene with the instructions for the protein. Now Nature can optimize each function of each gene copy—both improved functions can still happen albeit with separate proteins.

It is like having two Swiss Army knives and improving the saw on one and scissors on the other. You still have scissors even when your improvements on your saw have wrecked the attached scissors. They are just on the other knife.

In a new study in GENETICS, Hanner and Rusche explored this idea of “subfunctionalization” using the Saccharomyces cerevisiae proteins Sir3p and Orc1p. The genes that encode these proteins are thought to have arisen from a single ancestral gene after a whole-genome duplication around 100 million years ago.

The ORC1 gene is highly conserved in eukaryotes and serves an important role in DNA replication. In addition to this role, in S. cerevisiae, it also works to silence the mating type loci by recruiting the SIR complex to either HMRa or HMRα. Sir3p is also involved in silencing genes including HMRa or HMRα, but it does its job by recognizing deacetylated histones.

The basic strategy of this study is to compare Sir3p from S. cerevisiae with KlOrc1p, an Orc1p homolog from the yeast Kluyveromyces lactis that is involved in both DNA replication and gene silencing.

Since K. lactis did not undergo the whole genome duplication that S. cerevisiae did, the idea is that KlOrc1p represents the multifunctional ancestral protein (or at least what it has evolved into over the past 100 million years or so). Sir3p is the saw while KlOrc1p is the saw as part of the Swiss Army knife.

In the first experiment, Hanner and Rusche wanted to see if Orc1p from yeasts that did not undergo the whole genome duplication could rescue strains of S. cerevisiae lacking Sir3p. In other words, do these non-duplicated proteins have Sir3p functions or did Sir3p evolve new functions once freed from its DNA replication constraints? 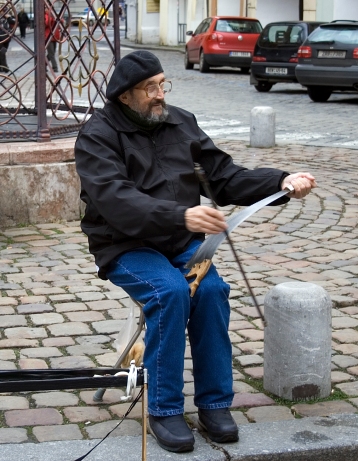 Not easy to play a song like this with a saw from a Swiss Army knife. (Wikimedia Commons)

The next step was to create chimeras between Sir3p and KlOrc1p to identify the parts of Sir3p that developed new functions.  Both proteins consist of four broad subdomains: AAA+, winged helix, N-terminal bromo-adjacent homology (BAH), and a rapidly evolving linker.

The researchers swapped domains between the two proteins and found that a Sir3p with an AAA+ subdomain from the KlOrc1p did not allow a S. cerevisiae strain lacking Sir3p to successfully mate. So Sir3p has gained some new function in AAA+ that the ancestral protein lacked. The authors were able to narrow down this region a bit more—the AAA+ subdomain lacking its first two alpha helices worked too.

Hanner and Rusche used chromatin immunoprecipitation assays to show that this chimeric protein did not make it to the HMRa or HMRα loci or to other repressed genes. They also looked at mRNA levels and showed that genes that should have been repressed weren’t. This Sir3p with the AAA+ subdomain of KlOrc1p clearly cannot do the job of Sir3p.

It is known that the AAA+ domain of Sir3p interacts with Sir4p. Another possible explanation for the failure of KlOrc1p to complement the loss of Sir3p may be that KlOrc1p has over the last 100 million or so years lost the ability to interact with the S. cerevisiae version of Sir4p. This does not seem to be the reason as adding in the K. lactis version of Sir4p, KlSir4p, to the S. cerevisiae strain deleted for Sir3p, did not allow the strain to mate. Inability to interact with Sir4p does not seem to explain the failure of KlOrc1p to rescue the strain.

The authors hypothesize that once freed of the constraints of the multifunctional Orc1p, the AAA+ region of Sir3p gained the ability to interact with deacetylated histones. This will need to be tested in future studies.

There you have it. Once freed of having to focus on two things, Sir3p was able to evolve new functions like recognizing deacetylated histones. Like a saw being freed from a Swiss Army knife so that it can sing.

Don’t try this with the saw from a Swiss Army knife.