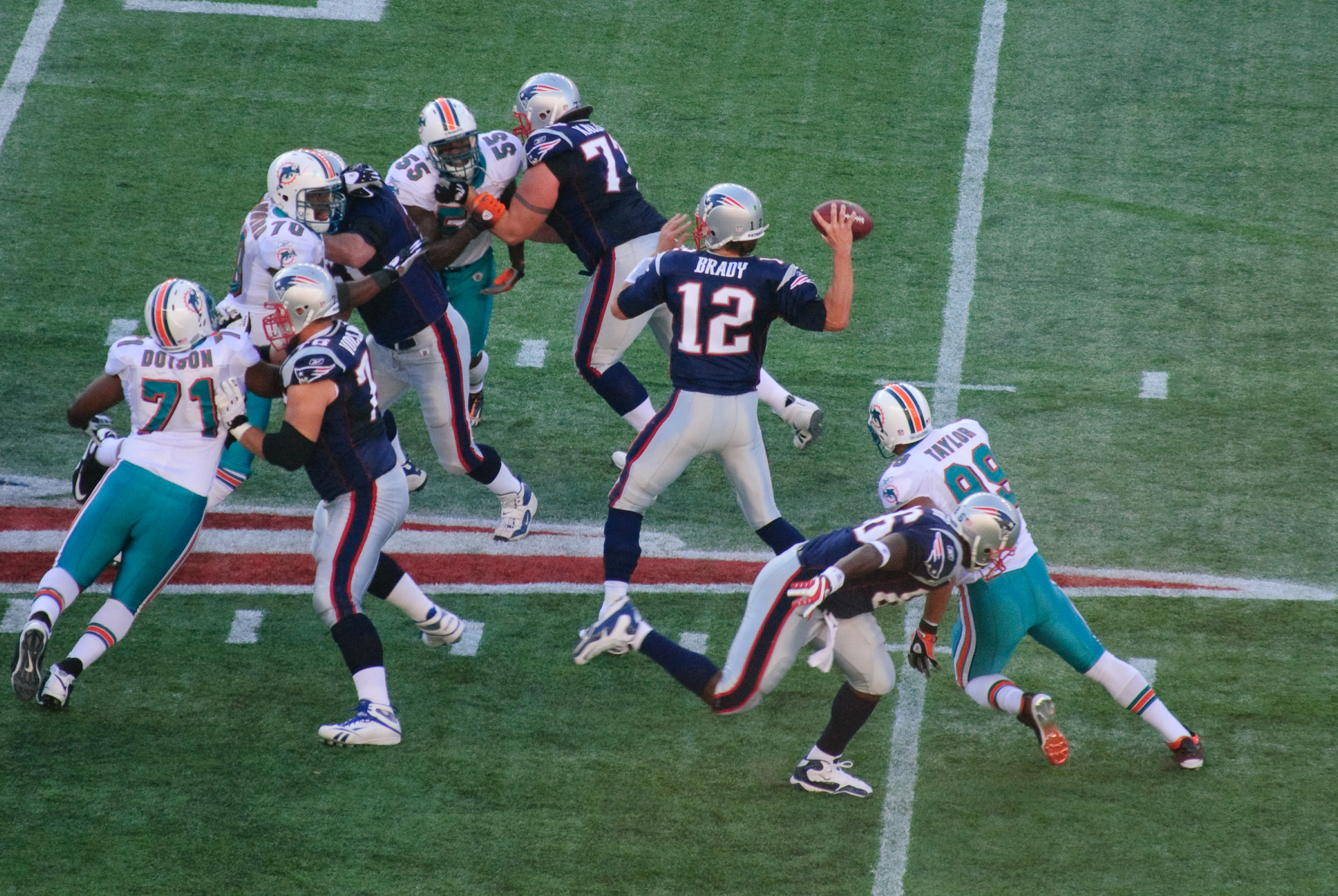 Tom Brady makes a team better by making the players around him play better. The same thing can be said for a mutant RPB7 gene that makes other genes work together better as an ethanol-making team. By Paul Keleher [CC BY 2.0 (http://creativecommons.org/licenses/by/2.0)%5D, via Wikimedia Commons.

There are a few ways to turn a failing sports team around. One is to tailor individual training to make each player better. Now, the team is better overall because of the changes each player makes.

Another way to improve a team is to change a player in a key position who makes everyone better. A classic example of this is the American football team, the New England Patriots.

On September 23, 2001, Drew Bledsoe, then the starting star quarterback of the New England Patriots, took a savage hit from New York Jets linebacker Mo Lewis. The Patriots replaced Bledsoe with his backup, Tom Brady, and some might argue, the team (whom Brady led to their first Super Bowl win that year) and the NFL, has not been the same since.

Quarterback Tom Brady, along with head coach Bill Belichick, makes whomever the New England Patriots bring in better. Wide receivers, tight ends, and running backs can be replaced in the lineup without the team missing a beat. He just makes the players around him better than they might be on another team.

In a new study, Qiu and Jiang take a “Patriots” approach to ethanol production in the yeast Saccharomyces cerevisiae. Rather than improving individual genes on their own, these authors instead decided to “bring in” a new version of RPB7, a gene that encodes a key subunit of RNA polymerase II, the molecular machine responsible for making messenger RNA (mRNA).

They hoped that changing this pivotal transcriptional player would cause lots of other genes to do “better” so that “team” yeast would make a lot more ethanol.  Their hopes were realized in their Tom Brady equivalent—a mutant they called M1. Yeast bearing this mutant RPB7 gene became the Super Bowl champs of ethanol production.

One of the keys to increasing ethanol production in yeast is to find strains that are more tolerant of high levels of ethanol. The more ethanol they can withstand, the more they can make.

These authors used error prone PCR mutagenesis of the RPB7 gene to find their game-changing mutant. They then took their library of ~108 clones and cultured them in increasing amounts of ethanol, selecting for more ethanol-resistant strains.

After 3-5 rounds of subculture, they plated the cells onto media containing ethanol. Around 30 colonies were picked and sequenced with the best mutant being the one with two mutations—Y25N and A76T. They named this mutant M1.

This mutant grew a bit better than the parental strain background, S288C, in the absence of ethanol, but where M1 really shined was when ethanol was around. It grew around twice as fast in 8% ethanol and could grow at 10%, a concentration that completely inhibited the parental strain from growing.

Being able to withstand high levels of ethanol is important, but it isn’t all that yeast have to deal with. There are multiple other stressors around when you are swimming in 20 proof media.

The authors then tested how this mutant dealt with other potential fermentation problems. For example, acetate, a fermentation byproduct, and high levels of NaCl both inhibit yeast growth. M1 tolerated 80 mM acetic acid and 1.5 M NaCl better than the parental strain did. 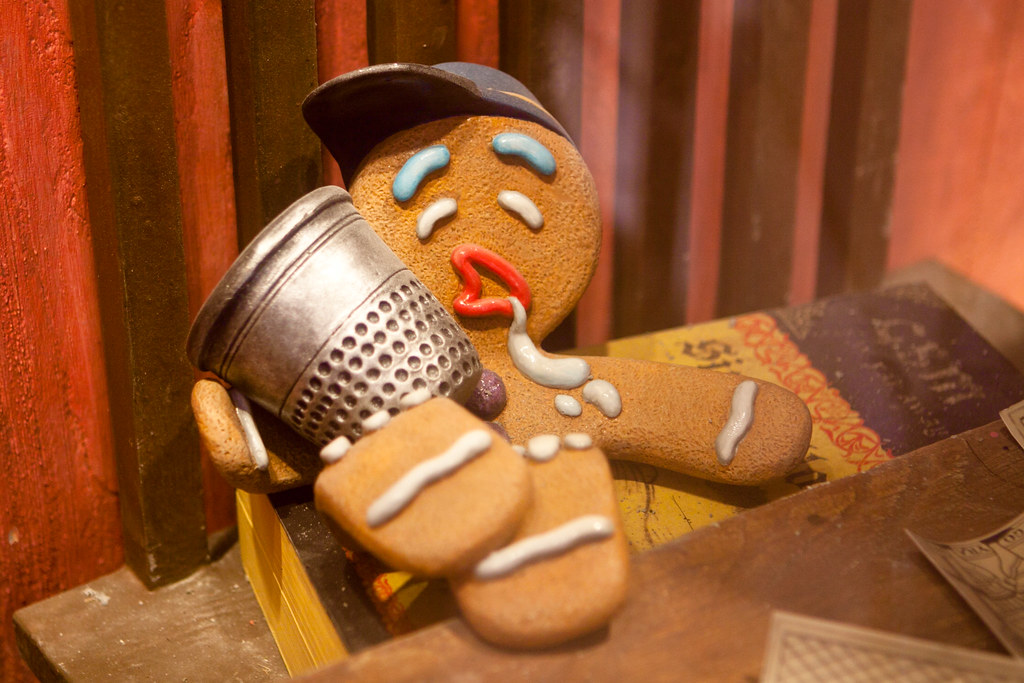 A couple of mutations in the RPB7 gene makes yeast able to tolerate alcohol way better than this guy. By jerome Chua [CC BY 2.0 (http://creativecommons.org/licenses/by/2.0)%5D, via flickr.

M1 appeared to be a champion mutant for making ethanol, and the fermentation studies bore this out.

Under a wide variety of conditions, M1 outperformed the parental strain in terms of growth rate, cell mass, and amount of ethanol made. For example, after 54 hours, yeast containing the M1 mutation of RPB7 managed to make 122.85 g/L of ethanol, 96.58% of the theoretical yield. This is a 40% increase over the control strain. Quite the ethanol producer!

Finally, Qiu and Jiang used microarray analysis of the parental and M1 strains at high levels of ethanol to discover the genes that M1 affected. They found 369 out of a total of 6256 genes behaved differently between the two strains. Of the 369, 144 were up-regulated and 225 were down-regulated.

I don’t have time to go over all the genes they found but a great many of them make sense. As the authors write, “…a significant set of genes are associated with energy metabolism, including glycolysis, alcoholic fermentation, hexose transport, and NAD+ synthesis.”  M1 seems fine-tuned for making ethanol.

A mutant subunit in RNA polymerase II has made yeast better at making high levels of ethanol, most likely by affecting many key genes at once. It is a fascinating way to quickly affect a whole suite of genes involved in a process. In the ethanol-making Super Bowl, we have a new champion yeast strain, M1.